Overall Observations: Overall, from thoroughly sifting through this website I learned a lot about how wildlife and their habitats are effected and how so many people here on Long Island take the responsibility for preserving the well being of a variety of species who are endangered. It brought awareness to environmental issues I was not familiar with prior to viewing this website. I learned that there are many ways to get involved and volunteer to aid with these unfortunate issues that we as humans can easily help prevent. There are many activities and attracts at this location that I would be interested in taking part in during the summer.

Long Island Explorer: Unfortunately, seabirds are currently struggling against marine debris found in the Gulf of Maine.Tiny sea islands can be found not too far from the coast of Maine where they are uninhabited making a great area for colonies of nesting seabirds. However, this wonderful remote nesting area is becoming an endangerment to wild life due to the "pervasive hand of human influence". Lobster traps, buoys, ropes, etc. are found piled into mountains three to four feet high. The island is adapting to this disaster causing rocks and grass to grow around them. The worst part of this is that seabirds are building there nests within these piles. There are authors who have written articles discussing the types of harmful debris, how these debris cause harm to birds, and strategies to reduce the trash.

LI Geology & Plant Communities: The refugee staff conduct annual rare plant surveys every August. The Sayville grasslands are known for supporting the largest population of the endangered "Sandplain Gerardia", also known as, "Agalinus acuta", on Long Island. The "Sea Beach Knotweed", also known as "Polygonum Glaucum", population at the Elizabeth A. Morton refuge is another plant that is surveyed. This plant is rare in New York and found on costal beaches, dunes and salt marshes.

Freshwater Observations: Wertheim hosts a variety of habitats, one of which are freshwater wetlands that attract turtles, frogs, fish and many more species. There is a current study taking place that will provide results for the refuge staff help them sustain critical habitats in the challenge of environmental threats such as storm events, habitat loss and sea level rise.

Trails, Greenways, Sustainability Observations: There are a variety of public attractions that are offered, these activities include: hunting, fishing, paddling, hiking, watching wildlife, and education facts about the environment. Wertheim is known to provide more than six miles of hiking trails. The following trails: White Oak Nature Trail, Indian Landing Trail, Black Tupelo Trail, and Fisherman Access Trail are open to the public. White Oak Nature Trail and the Black Tupelo trail is where most wildlife viewing is taken place. There is bird watching offered during the spring and fall migrations allowing visitors to experience sight seeing of a variety of birds. During the spring the refuge is blooming with various colorful flowers. Also, located at the visitor center there are ecosystems, wildlife viewing, and other recreational opportunities that are showcased here.

Wildlife Observations: One of their main goals here at this reserve is to maintain high quality habitats for all native wildlife. Mammals, reptiles and amphibians can be seen here along the trails and near the water. The refuge has also been involved in acoustic monitoring and netting of bats. This consist of recording bat echolocations in the wild for understanding how many and what types of bats reside in an area and monitoring species diversity and population size in birds and bats. Efforts are made to preserve, manage, and restore some of the last significant natural areas for wildlife habitat such as: coastal systems, native grasslands, and mature forests. These habitats will support threatened and endangered species in addition to hundreds of species of migratory birds and other wildlife within the Atlantic Flyway. A technique known as "prescribed fires" benefits a variety of natural resources. In areas where prescribed fire have been used, the refuge has been able to reduce the natural buildup of fuels offering better protection from wildfire and restore a natural ecological process to wildlands. Burning helps to maintain fire dependent vegetation such as warm seasonal grasses, manage grasslands, remove non‑native plants and improve feeding and nesting areas for wildlife.

Marine Ecology Observations: Wertheim is home to the “Big Fish Impoundment” which contains a "stop-log" water control structure to manage water levels to improve feeding habitats. Biologists complete a biweekly survey to document water level and record the species utilizing the impoundment. wildlife such as black skimmers, glossy ibis, common terns, least terns, and many more species, were seen on the tidal flats. [Editors Note:  From what I recall, this area used to be full of invasive phragmites?]

Finances: One of the many ways this website raises money is by selling "duck stamps" which in return allows people to be apart of supporting the bird habitat conservation with every purchase.

What Needs Improvement: When browsing through the site I found it confusing to access certain sections of the page.There is a lot information which is essential, but I feel as though it can be challenging to find what you're looking for from time to time. Overall the website is user friendly for the most part and allowed me to find informative facts about it's location. [Editor's Note: Just made two suggestions to Friends of Wertheim to update their links on the friends partnership page, and two see if they can link to the friends group from the Wertheim Page]

Question: I asked "What are the rules and regulations for attending the refuge and are there any restrictions?" They informed me that no dogs or bikes are allowed due to their presence being a disturbance to wildlife and is considered a safety risk to other visitors. There are boundary signs, closed areas and private property that is not accessible to visitors.

The Parks Cared About 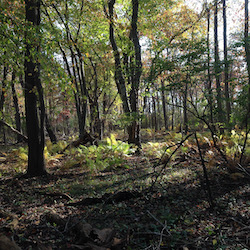 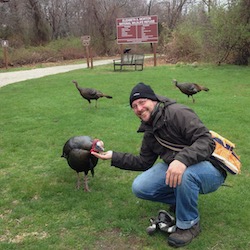 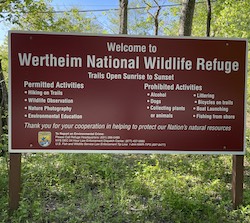 Back To Park Resources